So I decided to do something risky this year with my gardens..  So many new things are being tried and tested this year, and one of those things is using nothing but seeds to start everything with!

No buying already grown transplants at the local store, no letting my grandmother buy flowers to transplant into her gardens, and no more waiting way to long before I start seeds!  Now, I may not have a Greenhouse this year (RIP Greenhouse #1), but what I do have is a nice warm front porch and a little imagination..

While my family has been sick these past two weeks, I decided ‘what a great time to start planning my seeds’!  So I grabbed my seed calendar (a huge calender my grandmother got me just for keeping track of my seeds), I pulled out the tote of seeds from the basement, and started looking through my seeds and planning when I would plant everything.

This year, I tried buying seeds from two different magazine’s and from the store (VS last year when I only got them from the store).  I wanted a good variety of seeds and places because this year sounded like a good year to experiment with seeds and where I will be getting them from in the future.  (More on that later)

So back to seed starting..  When I went outside to get the seed starting trays from around the side of the house, I noticed that I hadn’t looked closely enough at the containers, and that all of the containers were really just holders, or containers that were way to big to start seeds in.   I brought them in anyways and was looking at the trays trying to decide what seeds would fit in such strange trays anyways, some ideas popped into my mind..

The first was the supply of egg shells I had been trying to save all winter to start seeds in this year.  And you know what?  They fit PERFECTLY in the odd round little holes of one of the trays!

The next step was to find things to start seeds in for the bigger trays..

I then thought about all the news paper in the basement that my grandmother and I found while cleaning out the basement.  My grandfather had stockpiled that stuff like gold when they used to heat this place with wood!  So I went downstairs, grabbed a few newspapers, and went to work making boxes.  I had learned to make these a long time ago when I was very little, and I always seem to surprise myself with them.  No matter how many years it has been since I’ve made them, I can still make a perfect box no problem.  A few sick day movies later, and I had over 20 boxes made and stacked in a box.

I added them to the trays (with some plastic bags under them of course) and to my surprise they fit perfectly!  Putting the boxes in the trays reminded me of when my brother and I used to play an old game called ‘don’t break the ice’.  Before you played the game you had to put all of these little plastic ‘ice cubes’ in a square game table thing and they all had to fit perfectly.  All of my boxes fit in nice and snug without to much complaint.  Then came the dirt and the seeds.. 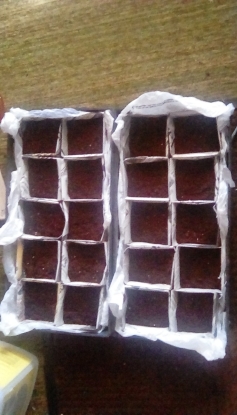 I’ll admit..  I was a little worried that the ink on the newspapers would cause the seeds not to grow..  But so far I haven’t had any problems and all of my seeds are starting to pop up!  I’m so happy!  The only real problem I’ve had with my seeds so far are that the cats are way to interested in them..  I found a few paw prints in them on the first day, and when I stuck them up where the cats couldn’t get into them, this happened:

I’ll post an update once all of the seeds are a little more ‘up and noticeable’.  I’ve been so jealous of everyone else starting seeds already and getting gardening stuff done, and I’m over here in the Michigan just waiting for the weather man to stop saying ‘chance of snow’.  It’s nice to finally get seeds started and to feel accomplish!  I even started feeling better the other day and got both of my gardens cleaned out!

Has anyone else started seeds yet?  Where did you get your seeds from this year?  Are you starting all your plants from seeds?  Or getting transplants?

Happy Spring everyone!  And don’t forget to talk to your plants (they make great listeners)! 😉