This was my brother and I’s first Halloween at college, and we had decided to go to the big Halloween Party that the college put on every year.

My brother and I dressed up to go to classes, and my brother had fun walking around scaring people in his costume all day.  (He dressed up as ‘Oogy Boogy’ from ‘Nightmare Before Christmas’.) 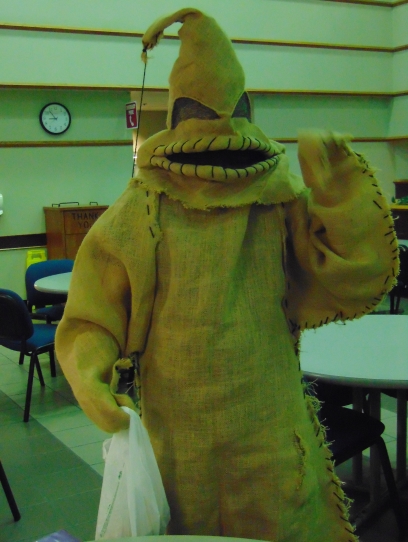 My brother loved sitting in chairs and acting like a ‘Halloween Prop’, only to jump out and scare students and staff..

(Let me just add that my brother made this costume by hand, just to creep me out because I don’t like Oogy Boogy..  Brothers.. *Rolls eyes*)

My brother and I had gotten to college early on Halloween because my friend Kenna didn’t want to be the only one in a costume just sitting there before class. (I don’t blame her, I wouldn’t want to sit alone in a costume not knowing if anyone else was dressed up ether!)

So off we went to sit with her, and I helped her draw on her face for her costume. (She was a mouse.) 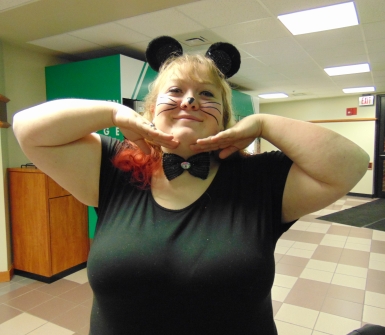 (Isn’t she just the cutest mouse you ever did see?!)

What was I dressed up as you ask?  A lumberjack of course!  (I was so thankful for my hat and beard!  It was freezing that day/night!)

During my first class (Spanish with my brother), my brother sat in a chair by the door and the teacher started telling people that she brought in a ‘prop’ for the scary movie we were going to watch in class that day.  There were two girls who would NOT go near my brother because they suspected that there was a person in there.  Some of the guys in class were smarter though.  They seen my brothers empty seat, put two and two together, and silently laughed to themselves as they watched my brother scare other people as they walked in.

In Spanish class, we watched a movie called ‘The Orphanage’, which is a Spanish movie, with English subtitles.  (We were told that we were lucky to get the English subtitles.  The ‘Spanish 2’ class had Spanish subtitles!)  It wasn’t too terribly scary, there were a few jump scares in it, but nothing too bad.  Most of it was honestly just sad, because in truth, the movie was a parents worst nightmare coming true..  (Don’t worry, I won’t give any spoilers!)

After Spanish class, I went to see my friend Kenna for a short time for lunch, before going off to computer class.  I had to go with my brother to get his lunch for him, because he didn’t want to take his costume off and he couldn’t hold the lunch trey with his pointy boogyman hands..  Boy were the people in the lunch room staring at him..!

After Computer class, I met up with my brother and Kenna in the main building, and found out that my brother spent the past two hours walking around college, staring into class room windows and scaring people..  Yup, that’s my brother everyone!  (I taught him everything he knows!) 😉 He actually stopped one class by doing that and everyone came out to check out his costume.  I was so proud of my brother when I heard that!  He worked so hard on making that costume, and people loved it!

Before going home, Kenna and I checked out the ‘Financial Aid’ department, because we had heard a rumor that they had all dressed up as the cast from ‘Stranger Things’.  And to my great amusement, it was true!  Sadly, the only picture I got from back there was a part of the wall that they had decorated (every wall back there had stuff from the show!  Demidogs, the portal to the other world, etc.).  No one wanted their pictures taken, so you’re just going to have to take my word that THE WHOLE CAST WAS THERE!  They really did an amazing job, and ended up winning best group costume in the costume contest!

We went home after school was over to get some homework and stuff done before the party later that night.  It started to snow a lot that night, and we had to drive in heavy snowfall to the college..  That part was not so fun..

Then it was time for the party..  This was a big moment for me!  My first college party!  Sure, it wasn’t the traditional ‘college party’..  But it was a party, at college, and I was a college student!  WOOH!  MY FIRST COLLEGE PARTY!

We got there about a half an hour early because of the snow (I wanted to leave early in case the snow slowed us down), and my brother and I spent the first part of the party hanging with some friend (both old and new).  My friend Sabation and his friend dressed up as FBI agents.  My friend from computer class went all out and dressed up as ‘young Madia’ (light up cigarette and all)!  Some new people we met that night were dressed up as a ‘stood up tinder date’ (an awesome girl who looks like ‘Ell’ from Stranger Things season 3), ‘Mr. Rodgers’ (a guy with really awesome dance moves), ‘slutty nun’ (really nice girl), and ‘country guy/hunter(?)’ (a guy in camo hat that I don’t think was actually dressed up), and there may be one or two that I’m forgetting..

I also have a friend in my Business class that had an awesome costume that I want to include!  So, a little back story first..  We call him ‘Thor’ in class because he looks so much like Thor.  So when Halloween rolled around, we all begged him to dress up as Thor for Halloween!  I was almost speechless when I seen him dressed up as Thor!  I just remember repeating ‘YOU DRESSED UP AS THOR!’ over and over again..    AND, not only was he dressed up as Thor for the Halloween party, but his roommate was dressed up as Wolverine!  (According to Thor, that was not planned..)  And his roommate truly LOOKED like Wolverine too!  Fake cigar in his mouth and all!

My brother and I spent four hours total at the party.  Three of those hours were spent dancing with friends (the music was loud enough to bust my eardrums) and the other hour was spent hanging out with friends.  The only thing I regret about the party was that I had taken my camera specifically to take pictures for my blog, and what do I forget?  My camera chip..!  Ugh..  Thank goodness for friends with camera phones!

There isn’t much to say about the actual party itself, besides the fact the I had an amazing time hanging with a great group of people.  The music was too loud to really talk too much, but eventually, the group I was in went to sit in a hallway just off from the dance room because our feet were sore.  There, we laughed, talked, took pictures, and laughed some more.

I checked in with my brother from time to time throughout the night, just to make sure he was having fun and didn’t want to leave.  He had his own group of friends he wondered off with and he spent the night playing card games and scaring people with his costume.

All in all, I think I’m going to remember this Halloween..  And ALL of the amazing people I met that night!

How did you spend your Halloween night?  If you don’t celebrate Halloween, then what Fall time holiday do you and your friends/family celebrate, and how?  I’d love to hear about it in the comments below! 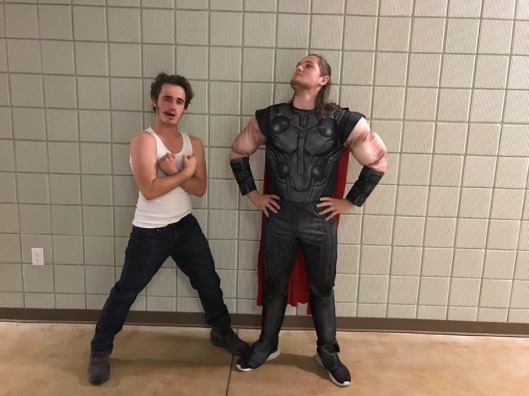