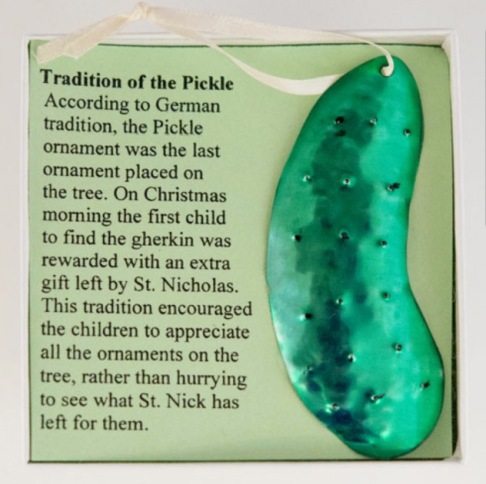 Cinnamon Rolls and Coffee for Breakfast:

Early on in my childhood, my father was constantly complaining that we woke him up too early on Christmas morning.  (What did he expect from two excited little kids?!)  My fathers first attempt at trying to ‘reign us in’ was to start a tradition of ‘no waking him up until 7 am‘.  That plan failed miserably, as my brother and I would just sit out in the Hall making a bunch of noise until 7 and then wake our parents up..  When that plan failed, he tried again..  This time, with the idea of; ‘if I have to wake up, there better be food and coffee waiting for me‘.

From then on, my brother and I weren’t allowed to wake up our parents on Christmas morning until we had cinnamon rolls done and out of the oven, and a cup of hot coffee in our hands, ready to give them to our parents as they sat up in bed.  We then had to wait ‘patiently’ in the living room while my parents drank their coffee in bed.  Only when they were done with their coffee, would they let us open presents. 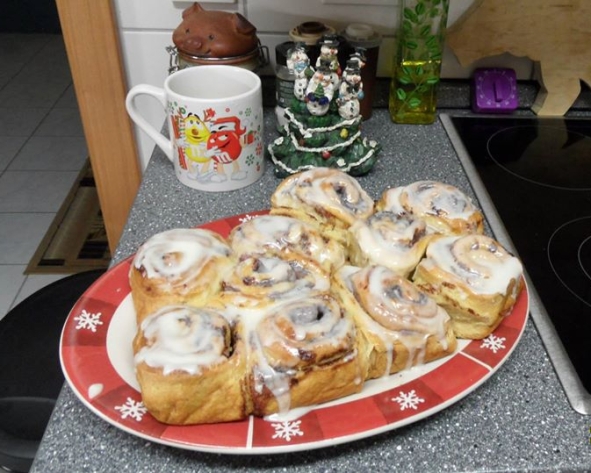 My grandmother would always send everyone in our little family a big huge stuffed stocking every year for Christmas.  No matter where we were stationed at at the time, we got a package in the mail marked ‘stockings’ that we weren’t allowed to open until Christmas Eve morning.

When Christmas Eve morning came around, my brother and I would call my grandmother in excitement, and she would let us open our stockings from her.  This was a little something that always tied us over until Christmas, and it was always filled with fun games and stuff that the family could all play with.  We have always looked forward to my grandmothers stockings year after year, and we still open them every Christmas Eve, even though my brother and I live with her now.

You’ve heard of Elf on the Shelf right?  Well we have a Grinch in a Pinch..

My father has about 20 different stuff animal Grinch’s around the house that he likes to move around and do evil stuff with.  Sometimes we would find my mothers stuff pigs hog tied and in the oven.  Other times, we would find the Grinch’s hiding in cupboards, house plants, or behind shower curtains, waiting for my mother to find them and scream in shock and frustration.

And sometimes..  My mother took revenge and made them admit to their crimes.. 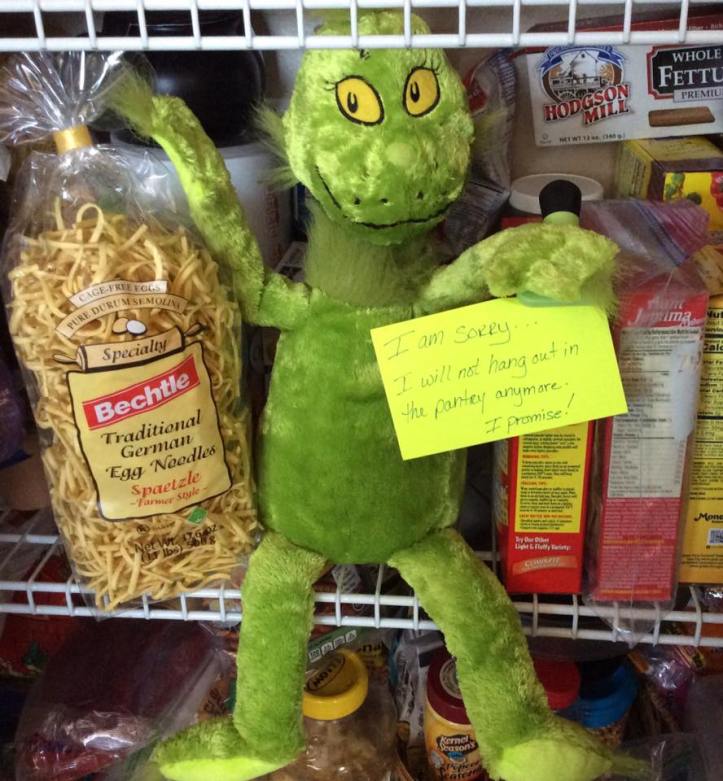 I’m sure that there my be some Christmas traditions that I’m forgetting (and I’m sure my mother will read this and remind of of a few I haven’t added), but these are the main ones that I can remember.  We have a few more traditions that we don’t do anymore since my brother and I moved out, such as having the whole family hang ornaments on the tree together, or dressing our animals up in Christmas clothes..  But I thought I would stick to the ones that we still do every year, and will continue to do every year.