Last year I had no idea what a cut garden was and hadn’t thought of adding it to my property.  A friend of mine down south and I constantly talk about what to add to the property.  One day, she brought up the idea of having a flower garden for flowers you cut and make a bouquet out of to bring into the house.

In my mind, I was thinking ‘That’s pointless!  You grow flowers outside or in a pot inside and they last longer than growing and cutting them!’  Her being a really good friend though, and me wanting a challange, I looked into flower gardens for cutting bouquets and found a lot of information on ‘Cut Gardens’.  It was amazing to find out how popular they actually were!

So I set to work on picking out a plot of land, clearing all of the sticks out, rototilled and getting ready for planting (Rototill; break up or till (soil) using a rototiller).  The spot I picked was an old wood pile that needed burning, so I spent three days doing nothing but burning wood.  Then, while rototilling, I noticed that there were many rocks in half of my garden (later I found out there used to be a rock driveway there and I was rototilling right on top of it!).  Now, learning so much about veggie gardens last year, I freaked out!  In veggie gardens, I learned that rocks are bad for veggie gardens, and for those plants that growing underground, rocks could give them odd shapes or worse..  So after spending a long time picking out rocks and putting them in a bucket, my Grandmother found me and laughed at my silliness.

‘Rocks don’t hurt flowers, they help them’ my Grandmother explained to my disbelief and announce.  I had just spent who knows how long trying to get these rocks out of this garden, and now you tell me they help?!  Rocks in your flower bed indeed don’t hurt it, in fact, I have noticed that the flowers I planted in the heavily rock infested side of the garden, grew more flowers than the heavily soiled side.  Why?  Because when we get the really heavy rains in spring and summer, the soiled side ended up drowning my seeds in soil and didn’t allow them to grow up.  But the rock half?  The rocks allowed them cracks in which to grow up and catch the sun and air and gave them a better drainage so that they didn’t drown! 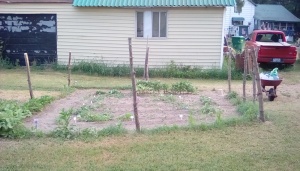 So now I’ve got the garden, but what’s next?  Well, the deer and rabbits were relentless in my new garden!  As I knew they would be.  Now, we had just gotten some trees around the property cut down, so I had some nice lumber laying around (the same lumber I used for my compost).  I  had been looking up different types of fences on Pinterest and had an idea of what I wanted.  To my luck, I found the perfect logs in the wood pile and there were just enough of the same size logs to set up the base of the fence. 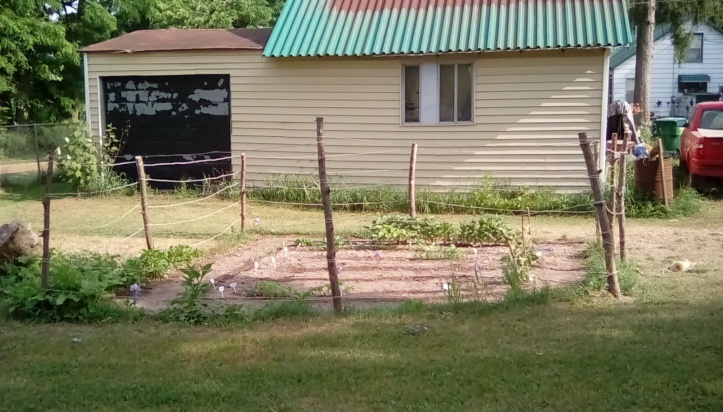 Now that the base was up, I had to find something to go around it.  Being the lucky girl that I am, my Grandmother had found telephone wire and wanted to throw it out because there was no use for it.  But you learn quick that everything can be repurposed on a homestead.  So I took the telephone wire and up it went on the fence.  That stopped the deer, but not the rabbits.  To my luck again (I’m very lucky, I know..), we found chicken wire in the old chicken coup and that got put on the fence as well.

My flowers are doing great!  The Zinnias are up and look beautiful, and now that the rabbits are staying out, the bachelor buttons and cosmos are starting to look ready to flower! 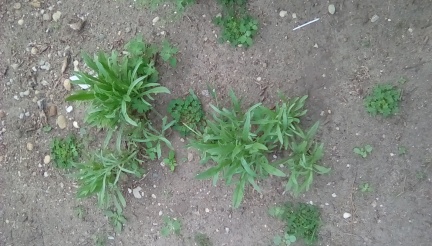 For someone who didn’t even know what a cut garden was last year, I’ve learned the names of many flowers and what they look like growing and grown.  I love the look on the people’s faces when I give them a bouquet of flowers and tell them that I grew them myself. 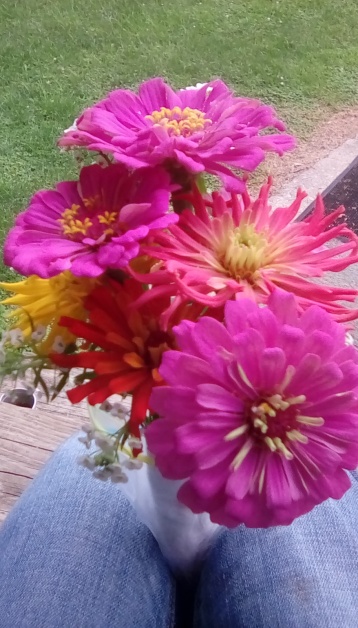 So, to end this blog post.  Rocks are good in flower gardens.  A cut garden is just a flower garden intended for cutting flowers to make bouquets.  And if you’re thinking of adding a Cut Garden to your property, make sure the rabbits aren’t the only ones enjoying them, share the love and beauty of your flowers!  Have an amazing day!  Smile!  And stop and smell the flowers. 💐